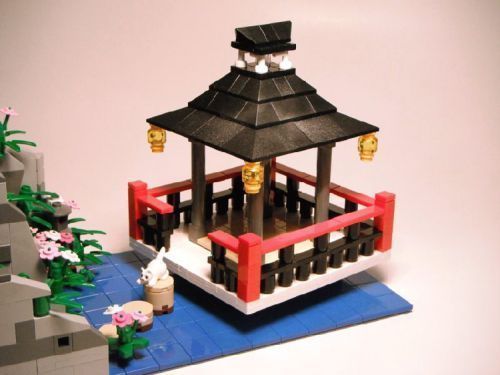 
The Element Water
The element water is one of the most important design tools in the Japanese garden and is used in many ways. In the so-called “”change gardens””, which invite you to a peaceful and relaxing walk, a pond with small stone Islands. Curved shorelines and a plant hem of sparks, magnificent spars and irises (Iris sibirica), interrupted by small groups of stones, give the pond a natural character. Water lilies are also allowed, but part of the water surface should always remain open so that the clouds and the plants of the shore can be reflected in it. An arch bridge made of wood or stone spans over larger water areas, while small ponds have narrow footbridges or individual stepping stones leading from shore to shore.

Stone water bowls come from the Japanese tea garden. They stand on the edge of the path and tune in to the traditional tea ceremony, which takes place in a quiet Pavilion. In the shade of a larger shrub, and surrounded by perennials and grasses, these small water bodies are particularly beautiful. A stone lantern, placed on a stone elevated between fern fronds, effectively complements the small garden scene. In the evening, the lantern spreads a soft light and creates a magical atmosphere.

The Element Stone
Large natural stones are indispensable from the Japanese Garden. Beautiful boulders adorn not only the pond, but can also lie in of a wavy lawn, landscape, or between Rhododendron and cut boxwood. The stone groups are arranged in such a way that they look like parts of a natural landscape.

Landscapes in miniature gardens, the raked gravel surfaces of the Meditation. Depending on the wave pattern, symbolizing the sea, a lake or river. Boulders in the areas become islands washed by the water. These small gravel and rock gardens are the ideal retreat for stressed contemporaries. It is best to distinguish it from the rest of the garden by an evergreen hedge or a small bamboo grove. Then you can come there, undisturbed, to rest and gain strength for everyday life.

Styling tips
The approximately 100 square meter garden has everything a typical Japanese garden needs: directly on the terrace is a small gravel landscape, on a green plant cushion three striking stones were set in scene. Large boxwood balls under the gravel surface. In front of it is a Japanese stone lantern. On the left side of the terrace grows a fan maple (Acer palmatum), underplanted with low grasses and ground-covering perennials. Round stepping stones lead with momentum to the small seat at the pond. Chinese dwarf lilac (Syringa meyeri ‘Palibin’), dwarf blood plum (Prunus x cistena) and umbrella bamboo (Fargesia) give the red bench an atmospheric setting. Magnificent Rhododendron and Azalea bloom in may, surrounded by ferns and low shrubs.