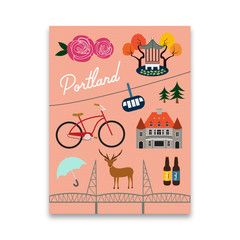 Hey, look what I found! Check out Iconic Portland by Postal Modern by Tamara Mayne on Bezar